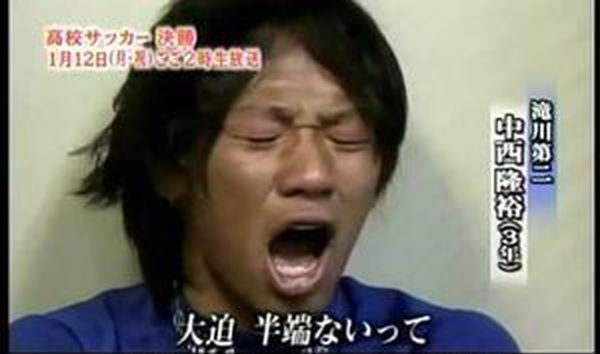 基礎英語３ Review 11 I want to make my family happy!

Yoko: Sho, I would like you to run with me, at least once in a while.

Yoko: I heard you want to become an international citizen, Sho. I think that is just amazing. I am so proud of you.

Sho: Who told you?

Yoko: Mimiko did. You told Miki, she told Mimiko, and Mimiko told me. Pretty simple.

Yoko: That’s a good thing. It means we are thinking about you.

Sho: So…Miki thinks about me?

Lesson 042 Someone is climbing that tree

Yoko: I think your form is getting better, Sho.

Sho: Well, I run every morning. I don’t run out of breath anymore.

Sho: Yeah, yeah. Huh? Someone is climbing that tree. Is it David?

Sho: David! What are you doing?

David: Hi, Sho! I can’t hear you. Please speak up!

Sho: What are you doing, David?

David: I want to take a picture of the river. I’m looking for the best position. Ahhh!

Lesson 043 It just came into my head

Sho: I said to Miki and David, “I want to become an intenational citizen.”

Sho: An American from Chicago. He is staying at our ryokan. He’s teaching me English.

Mari: Why are you worried? I’m sure Grandma is happy.

Sho: Yeah, she said she’s proud of me. But…it just came into my head, and I said it.

Mari: So you didn’t mean it?

Sho: I did, but…I haven’t really thought about it.

Lesson 044 I want to make my family happy!

Sho: What should I do? I’m not sure I can become an international citizen.

Mari: Look, if it just came into your head, it’s probably how you feel.

Sho: Do you think so?

Mari: Of course! Think big, Sho! You can do anything you want. What do you want to do now?

Sho: I want to set concrete goals for myself.

Mari: Keep going. What else?

Sho: I want to become better at wadaiko! I want to make my family happy!

Mari: You see! If you talk about it, you can see it. Remenber that, Sho! As for me, I want to sleep. Good night.

本を読んでもらいたいの。
I would like you to read a book for me.

読むのが上手になってきていると思うよ。
I think your reading is getting better.

きっといい夢がみられるよ。
I’m sure you’ll have a good dream.

なりたいものには何にだってなれるんだよ。
You can be anything you want.

私と一緒に来てほしいんです。
I Would like you to come with me.

私の犬を一緒に探してほしいんです。
I Would like you to find my dog with me.

君ならきっとできるよ。
I'm sure you can make it.

きっとすべてうまくいくよ。
I'm sure everything will be all right.

基礎英語３ Lesson 086 I will beat her this year

ミミ子とミキは、青木社長と彼の陸上部コーチと一緒にマラソンコースを走っています。 Contents1 I will beat her this year2 今年はわたしがやっつけますよ3 Words ...

夜、勉強中の翔に姉の真理から電話が掛かってきます。 Contents1 I can help out after Obon2 お盆以降、手伝いはできるわ3 Words & Phrases4 L ...