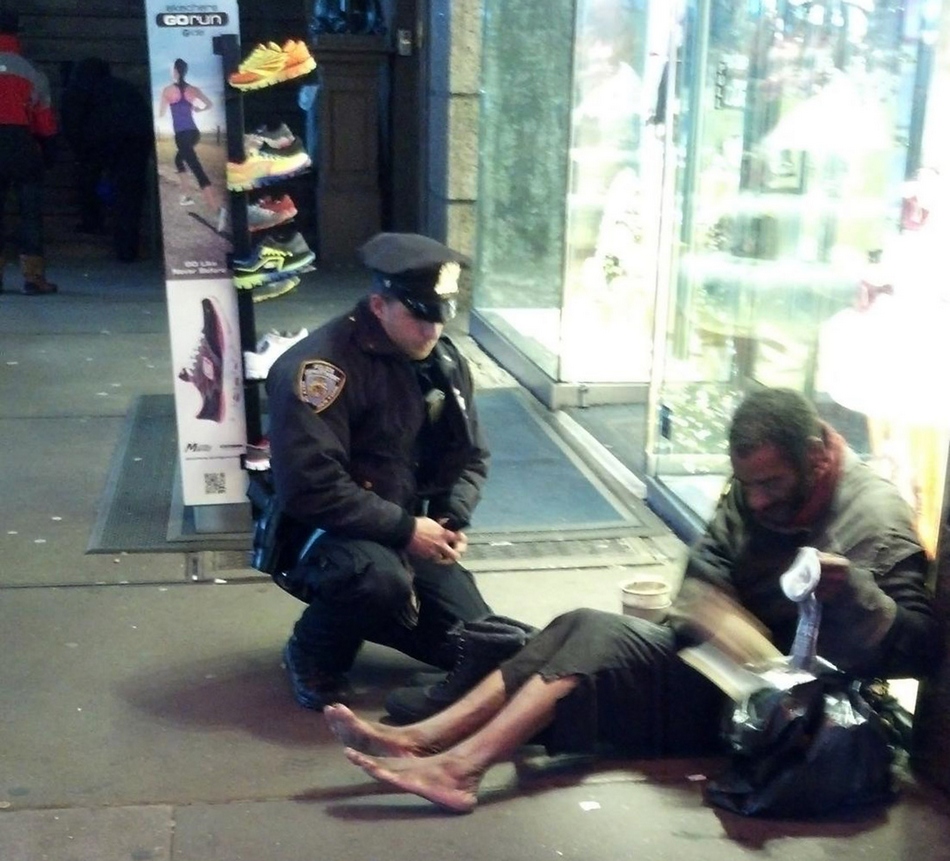 The Cop and the Anthem Act Three

Five blocks Soapy travelled before his courage permitted him to woo capture again. This time the opportunity presented what he fatuously termed to himself a “cinch.” A young woman of a modest and pleasing guise was standing before a show window gazing with sprightly interest at its display of shaving mugs and inkstands, and two yards from the window a large policeman of severe demeanor leaned against a water plug.

Soapy straightened the lady missionary’s readymade tie, dragged his shrinking cuffs into the open, set his hat at a killing cant and sidled toward the young woman. He made eyes at her, was taken with sudden coughs and “hems,” smiled, smirked and went brazenly through the impudent and contemptible litany of the “masher.” With half an eye Soapy saw that the policeman was watching him fixedly. The young woman moved away a few steps, and again bestowed her absorbed attention upon the shaving mugs. Soapy followed, boldly stepping to her side, raised his hat and said:

“Ah there, Bedelia! Don’t you want to come and play in my yard?”

The young woman faced him and, stretching out a hand, caught Soapy’s coat sleeve.

“Sure, Mike,” she said joyfully, “if you’ll blow me to a pail of suds. I’d have spoke to you sooner, but the cop was watching.”

With the young woman playing the clinging ivy to his oak Soapy walked past the policeman overcome with gloom. He seemed doomed to liberty.

At the next corner he shook off his companion and ran. He halted in the district where by night are found the lightest streets, hearts, vows and librettos. Women in furs and men in greatcoats moved gaily in the wintry air. A sudden fear seized Soapy that some dreadful enchantment had rendered him immune to arrest. The thought brought a little of panic upon it, and when he came upon another policeman lounging grandly in front of a transplendent theatre he caught at the immediate straw of “disorderly conduct.”

On the sidewalk Soapy began to yell drunken gibberish at the top of his harsh voice. He danced, howled, raved and otherwise disturbed the welkin.

The policeman twirled his club, turned his back to Soapy and remarked to a citizen.

“’Tis one of them Yale lads celebratin’ the goose egg they give to the Hartford College. Noisy; but no harm. We’ve instructions to lave them be.”

Disconsolate, Soapy ceased his unavailing racket. Would never a policeman lay hands on him? In his fancy the Island seemed an unattainable Arcadia. He buttoned his thin coat against the chilling wind.

○ drag … into the open …を外に引っ張り出す

○ at a killing cant 悩殺的な角度で

○ at the top of one’s voice 大声を張り上げて

コーヒーとケーキと衝突 Coffee and Cake and the Clash

ラジオ英会話 Lesson 188 理解：誤解を正す KEY SENTENCE I think many people have misunderstood the movie, though. It ...